IMPALA used an off-policy correction to learn from experiences in a First-In-First-Out (FIFO) queue.

R2D2 is similar to Ape-X in that it uses

The biggest difference is that R2D2 adds an LSTM layer after DQN’s convolutional stack. The next biggest difference explored in the paper is how to initialize the LSTM cell. Suppose there was some sampled trajectory $s_1, a_1, r_1, …, r_{T_1}, s_T\(that we want to train the network on. One option might be initializing the LSTM cell to 0, but then the network has to be capable of starting from any initial state\)s_k$$ and making accurate predictions when its own state is always the same (0). Another option is using the entire episode’s trajectory, but this raises computational challenges ( how to handle different length trajectories? how to remove high autocorrelation in the trajectory?). This paper proposes and evaluates two non-mutually exclusive solutions:

Other smaller differences, which aren’t explained or explored significantly in-depth, include:

TODO: check that max is indeed over steps within a trajectory

On the Atari-57 benchmark, R2D2 crushes most competitors in terms of human normalized score and training time, although the training time is questionable since we aren’t told how many parallel training steps are being performed. 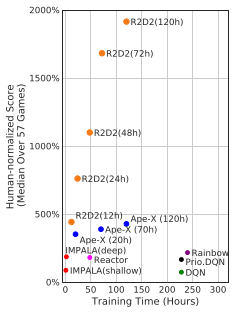 Interestingly, the authors claim this level of performance is achieved with a single setting of hyperparameters. Why do hyperparameters matter less for this algorithm than, say, IMPALA, which uses per-environment hyperparameters? Relatedly, how much better does R2D2 perform with task-specific hyperparameters?

Basically indistinguishable from IMPALA (the only baseline).

The reviewers were surprised that the LSTM improved performance so much on Atari, given that most of those games are fully observed. These authors verified the importance of the LSTM by ablating it. Why does having memory help?