A Tribute to Kentaro Miura

After the rotten, terrible, no good ending to Shingeki No Kyojin, I joked to a friend that one advantage of Kentaro Miura publishing Berserk so slowly is that it’s impossible to screw up an ending if the story never ends.

A week later, Miura died of aortic dissection at the age of 54. For those who don’t know who he is, he is the writer of Berserk, a manga that started in 1988 and has continued to today that is (in my opinion) one of the best pieces of fiction ever written by a human, comparable to John Steinbeck. Even if you haven’t read Berserk or heard of it, Kentaro and Berserk’s impact on manga and other genres is extensive. Quoting from Wikipedia:

Berserk is regarded as one of the most influential dark fantasy works.[158][159][160][161] According to writer and editor Kazushi Shimada, series like Fullmetal Alchemist. Attack on Titan, Demon Slayer: Kimetsu no Yaiba or Jujutsu Kaisen would not have existed if not for Berserk.[162] Some dark fantasy manga authors who have declared influence from Berserk include Hajime Isayama (Attack on Titan),[163] Kazue Kato (Blue Exorcist)[164] and Yana Toboso (Black Butler).[165] Makoto Yukimura (Vinland Saga),[166] Yūki Tabata (Black Clover)[167] and Ryōgo Narita (Baccano! and Durarara!!) were other authors influenced by the series.[168] Adam Deats, assistant director of the 2017 Castlevania animated series, stated that the show was also inspired by Berserk.[157] Berserk has also inspired a number of video games, including the Dynasty Warriors series,[169][170] the Final Fantasy series (considerably Final Fantasy VII and XIV),[169][171] the Souls series,[170] Bloodborne,[160] and Capcom’s Devil May Cry and Dragon’s Dogma series.[172][106]

But this hardly does justice to the masterpiece that is Berserk. In the time that I have, I can’t discuss or even summarize the storyline in a way that would do it justice. What I can do is give just a taste of why Berserk is beautiful, in two ways. First, share with you how gorgeous the artwork is. So many panels are triumphs of gothic art, and yet they are so commonplace, we forget how remarkable they are. The unexplainability of the eclipse: 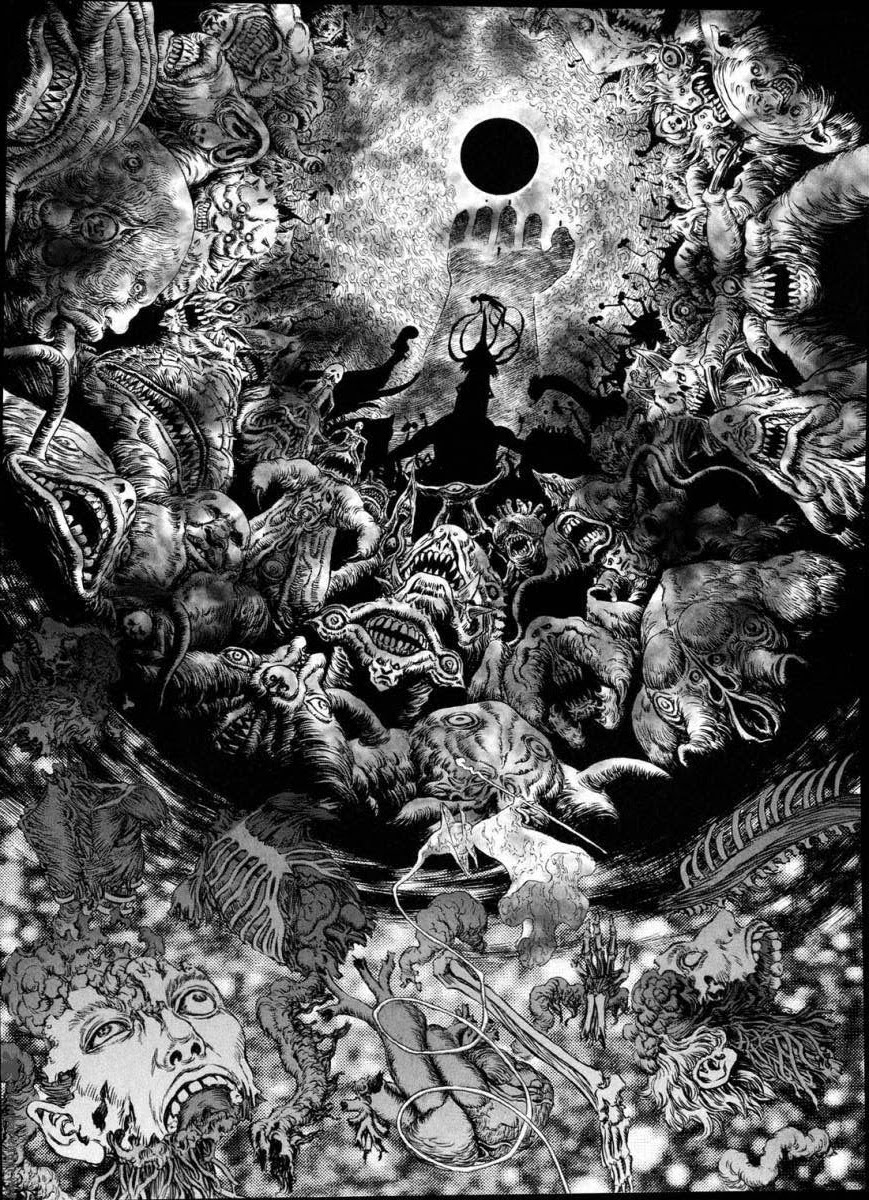 The betrayal of Guts: 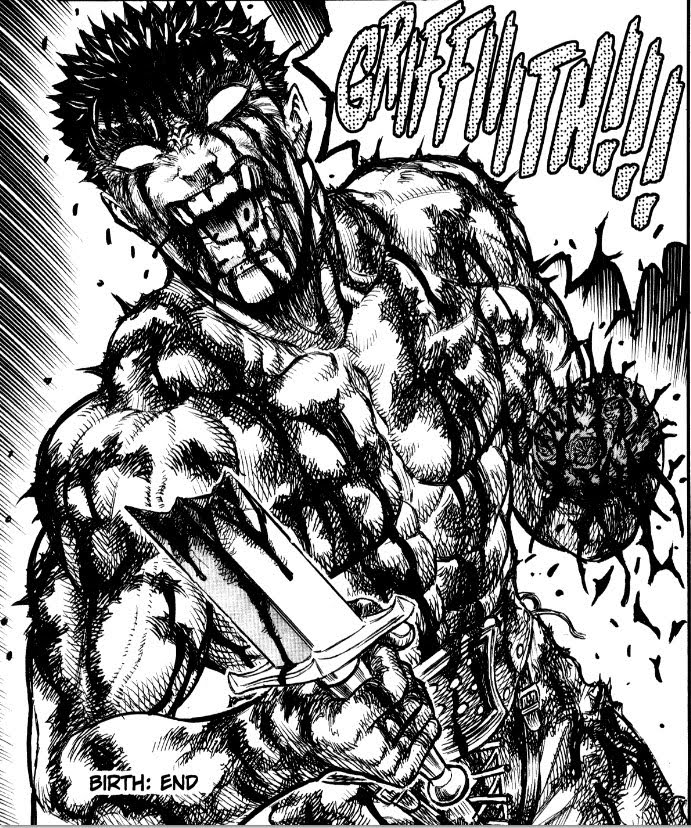 The beautiful tranquility of Gut’s war: 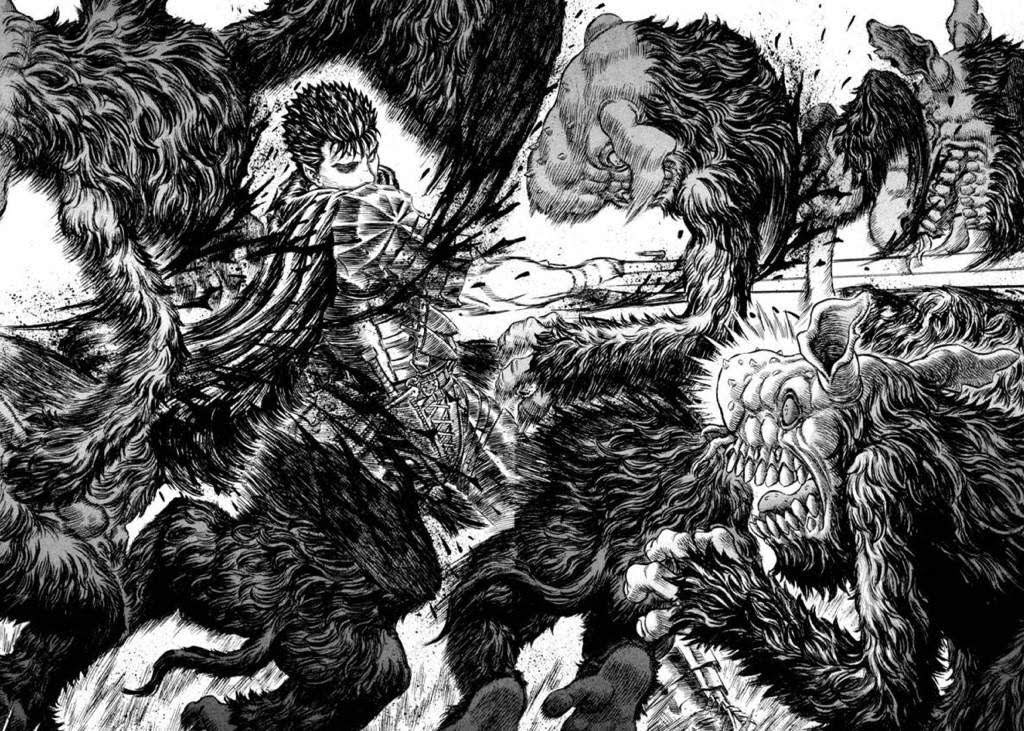 The hollow regret of Skull Knight 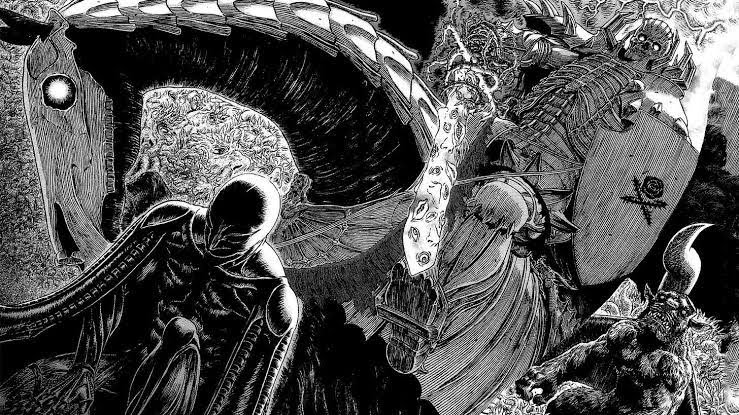 The strained and difficult relationship of Guts and Casca: 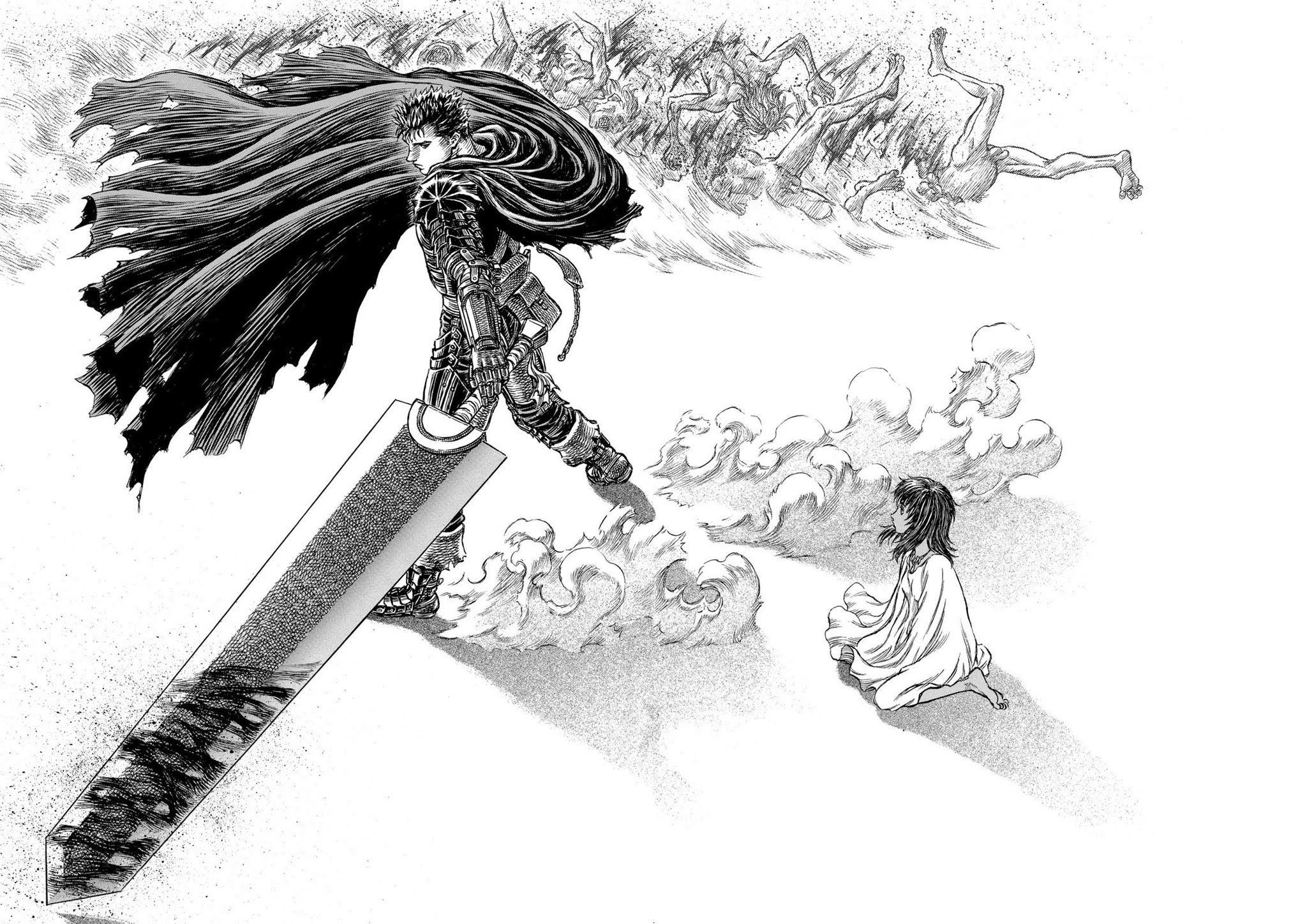 The use of absence 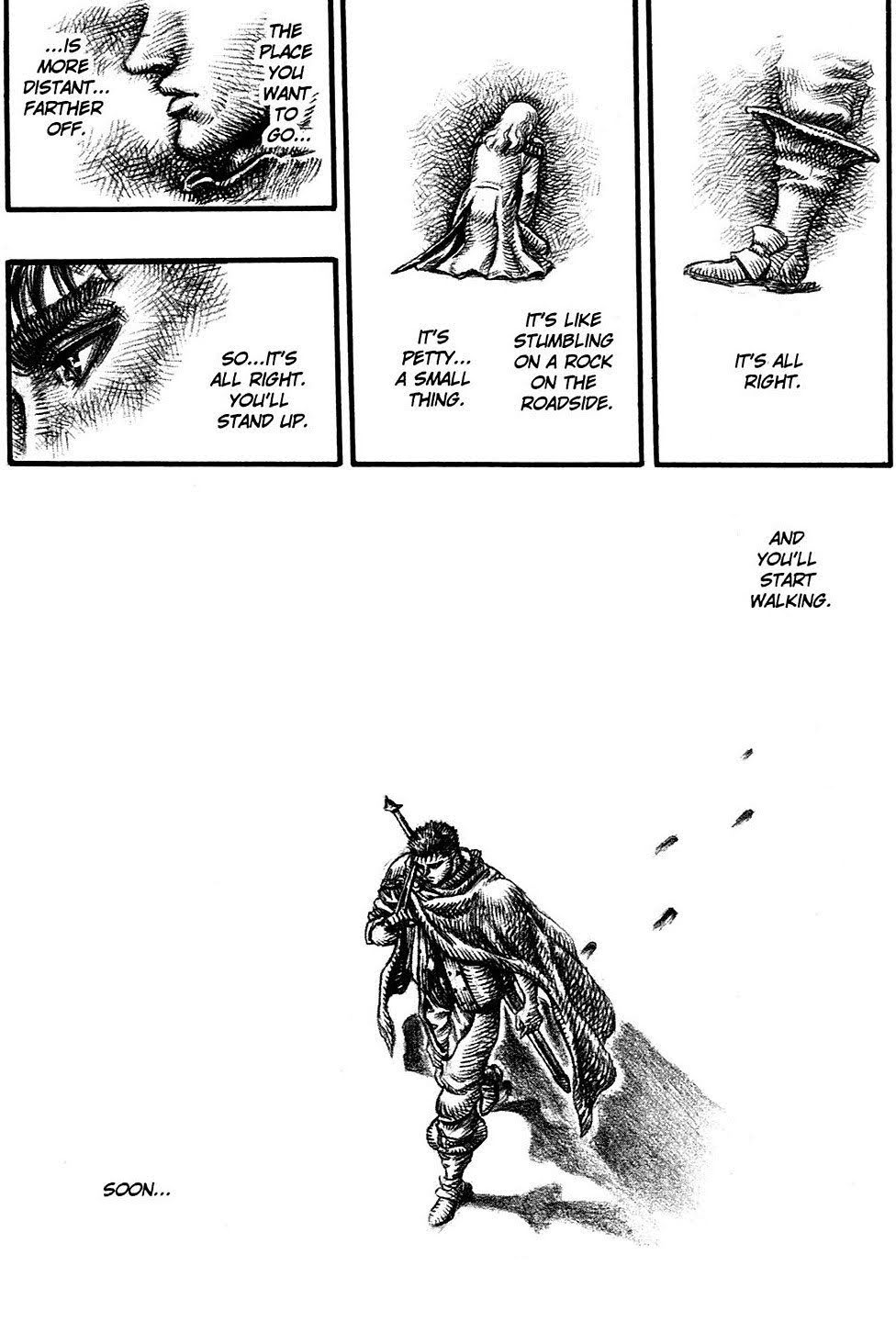 The paradoxical honor of the apostle Zodd: 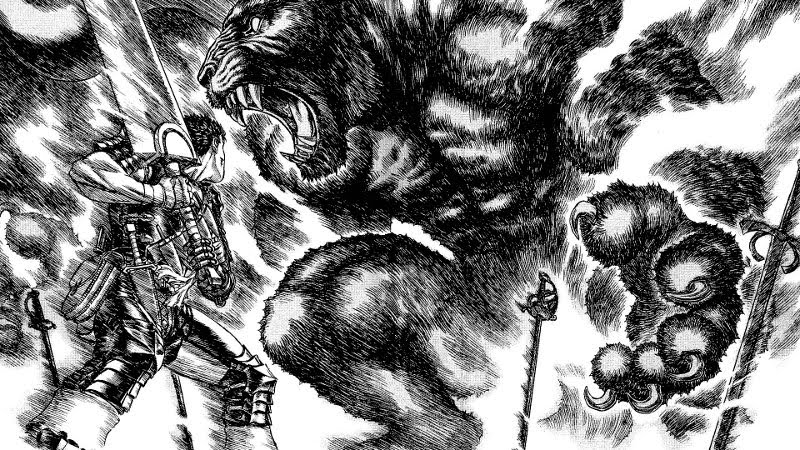 For years, my desktop background has been this panel: 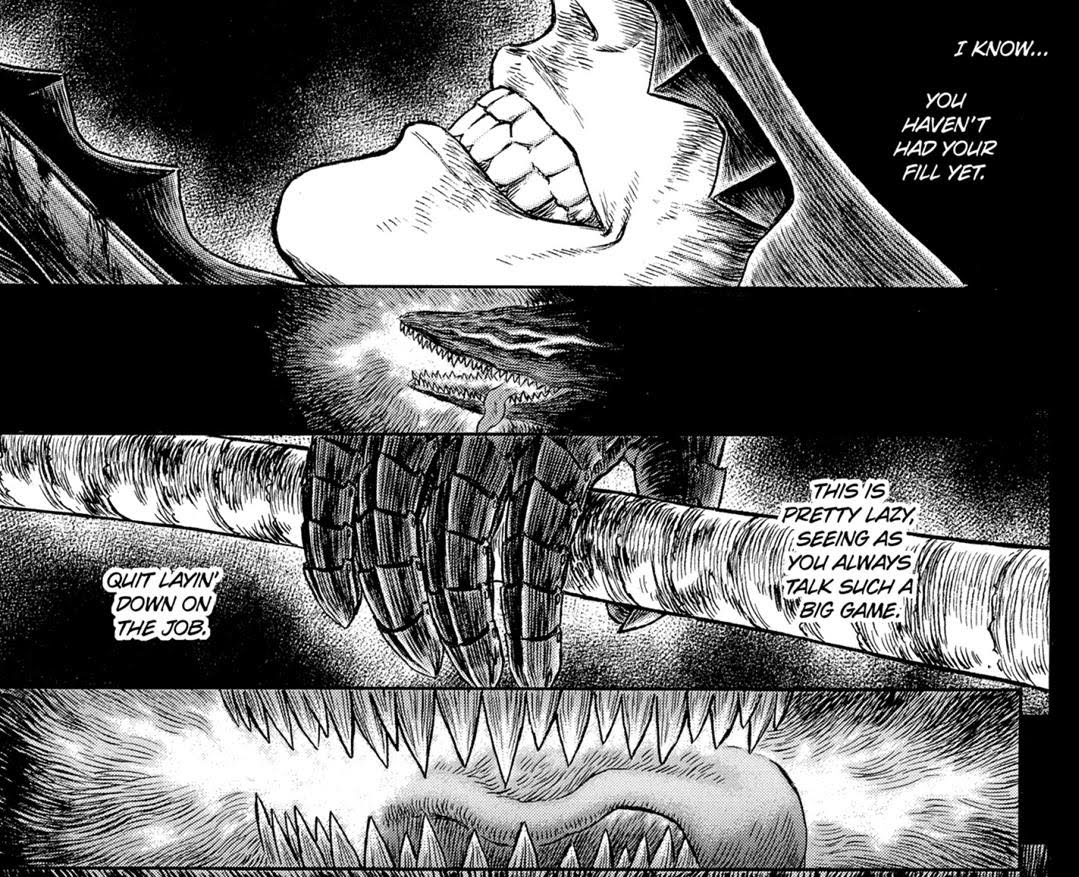 Second, I can share with you my favorite character Griffith. To almost all who read the series, Griffith is the villain. We see his rise to power, his foolish impulsiveness and depression when Guts leaves that compels him to throw away all that he’s built. We see him betray his loyalest soldiers and his best friend immediately after they risk their lives to rescue him. Why is Griffith such a compelling character?

Note that I didn’t call Griffith a villain. In my opinion, to label him a villain deeply misunderstands Berserk.